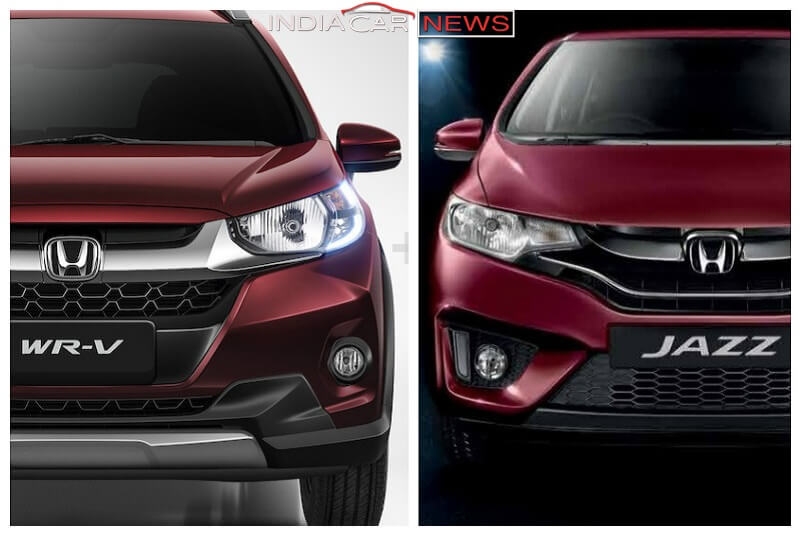 Here’s a comprehensive spec-based comparison between the Honda WRV and Honda Jazz.

Honda has dived into the sub-four meter SUV space with its highly anticipated WR-V. Based on Jazz, the WR-V gets a host of new styling elements, additional in-cabin tech and elevated proportions that separates it from its donor hatchback. The crossover-like bits on the vehicle add sporty flair to it and Honda is marketing WR-V as the ‘Sporty Lifestyle Vehicle’ that brings together ruggedness and comfort. A look at WR-V affirms the effort Honda has put in to distinguish it from Jazz. Now that the crossover is out for retail we stack up both the models to find out how different these are from each other. Here is a detailed spec-based comparison between Jazz and its spin-off WR-V. (Honda WRV Vs Honda Jazz)

Belonging to Honda clan, the two cars have a lot in common. They share underpinnings, mechanicals and most of the tech. Positioned as the sub-four meter SUV, WR-V goes up against Ford EcoSport and Maruti Viatara Brezza in the segment. However, due to its pricing and crossover resembling styling, it is also pitted against Fiat Avventura, Toyota Etios Cross and Hyundai i20 Active from the crossover segment.

Honda Jazz on the other hand is a premium B segment hatchback that takes on the likes of Hyundai Elite i20, Volkswagen Polo and Maruti Baleno. Hence there is a radical difference in the body styles which also reflects in their pricing. Read More – Honda WRV Vs Maruti Vitara Brezza

Built on the same platform, there is a radical difference between Jazz and WR-V in terms of looks. The front profile has been crafted aggressively to give WR-V SUV-like character. It sports a thick chrome band that runs between the sleek pulled-back headlamp units. Lower front apron is broad with rounded fog lamps, black cladding and silver skid plate for an aggressive crossover-ish appearance. Side facet receives the same treatment with key elements like cladded wheel arches, large alloy wheels, roof rails and sharp lines bringing out the sporty character. As we move to the rear, there is a sportier bumper with faux aluminium skid plate, thick body cladding and Jazz-inspired, boomerang-shaped tail-lamps. Dimensionally, WR-V is 44mm longer, 40mm wider and 57mm higher than Jazz.

In comparison, Jazz has a subtle styling and a lower ground clearance suitable for a hatchback. In front, there is a square-like bonnet with sharp lines and a dual-part grille with a thin chrome lining placed parallel to the bold chrome band. The fog lamp housings are larger and the air-dams are shorter. Body cladding, roof rails and faux skid plate is missing in the Jazz. View from the side reminds of Amaze with a sharp line running across the length of the window line. Supporting creases on the flanks add to the visual appeal. Round the back, there is a chrome garnish on the boot lid, blackened fog lamp housings on the lower bumper, vertically stacked tail-lamps and pointed rear profile.

Unlike the exterior profile, WR-V will mirror Jazz’s interior styling and design to curb pricing. Even most of the equipment has been inherited from the donor hatchback. But Honda has packed it with additional features on the outside as well as inside. Among the exterior fitments, the subcompact SUV sports new front grille, smoked headlamps, LED DRLs, plastic cladding around bumper and wheel arches, scuff plates and roof-rails.

The in-cabin tech on the WR-V is similar to the new City featuring new upholstery, chrome accents on dashboard, handbrake and air-con vents and water proof floor mats. Besides, the wheelbase will be longer, implying more space inside the cabin. The WR-V benefits from 7-inch DIGIPAD infotainment system with Apple CarPlay, Android Auto, Bluetooth & navigation system from the new City sedan. The advanced tech from Jazz’s top-spec variant including magic seats, automatic headlamps and rain sensing wipers have been dropped to curb pricing. Though, it comes with electric touch sunroof.

On the safety front, WR-V gets ABS with EBD and dual front airbags are standard across line-up.