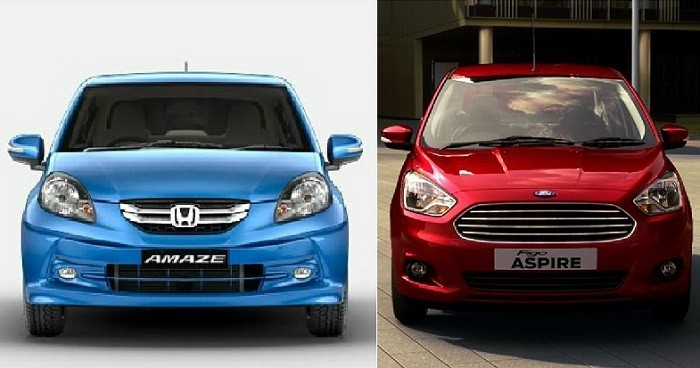 The sub-4 metre sedan segment is currently one of the most highly competitive segments, which is currently ruled by Maruti Swift Dzire. Honda entered this segment with the Amaze, which was also the company’s first ever diesel powered car in India. The vehicle received excellent response from car buyers, and is currently the second best-selling compact sedan in India. There are few other players as well in the segment including Hyundai Xcent and Tata Zest, which too are doing fairly good business for their respective markets. Now, Ford India has entered into the compact sedan segment with its much-awaited Figo Aspire. Unveiled at the 2014 Delhi Motor Show as concept, the compact sedan is equipped with various segment leading features.

While the Figo Aspire scores more on comfort and safety front, the Amaze is benefited with Honda’s acceptability among buyers as brand. Moreover, the Honda’s small sedan is also claimed to offer an excellent fuel efficiency of about 25.4kmpl. Ford India needs to work on its cost of ownership, as buyers in India have a common perception that Ford’s after sales and service is comparatively higher than other brands. But if Ford somehow manages to pull this off, the Figo Aspire can become a serious threat to its rivals.

Ford India claims that the new Figo Aspire is equipped with a host of comfort, convenience and safety features. The range-topping model features six-airbags (driver & co-driver, side and curtain airbags), ABS with EBD, Electronic Stability Programme (ESP), Hill Descent assist, parking sensors and many more. It also features leather seats, which is the first in segment. The Honda Amaze, on the other hand, too offers several safety and comfort features (Dual airbags, ABS, EBD, Infotainment system, etc), but the Figo Aspire with several segment-first features outsmart everyone in the class including the Amaze.

Also Read: Here’s Everything You Want to Know About Ford Figo Aspire

The Honda Amaze is also the most powerful diesel car in its league. It is powered by a 1.5-litre i-DTEC motor that is good for 99bhp of power, while the Figo Aspire gets a 1.5-litre diesel unit producing about 90bhp. Talking about gasoline motors, the Aspire has a 1.2-litre Ti-VCT motor while the Amaze gets a tried & tested 1.2-litre i-VTEC motor. Setting another example, Ford India has added a six-speed dual-clutch automatic gearbox to its upcoming sedan. On the other hand, the Honda Amaze comes with a conventional automatic transmission.