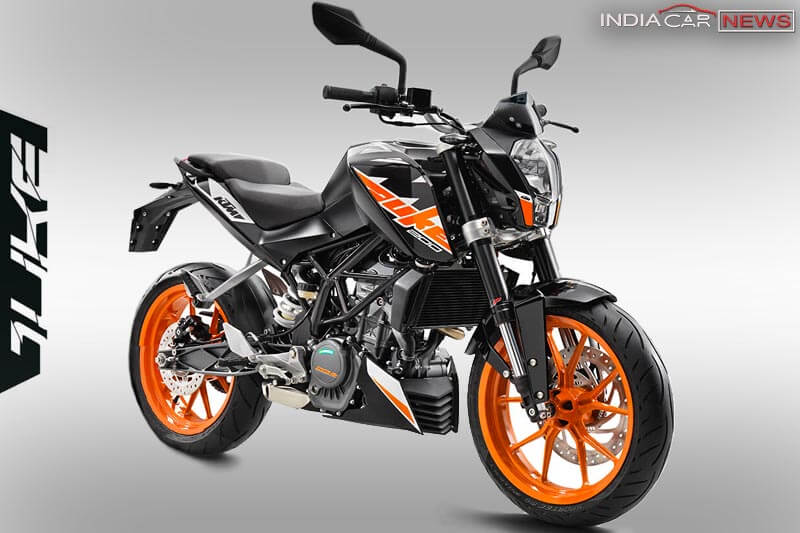 Taking about 2017 Duke 200, the naked bike gets subtle changes and is powered by the same engine that is now BSIV compliant. Updates to the naked streetfighter include new brake lever, integrated passenger grab rail, new ignition key location, new instrument cluster, new sub-frame and redesigned pillion seat. As for the power, it continues using the same 199.5cc, single cylinder, 4-stroke, liquid-cooled engine from the preceding model, which has been calibrated to comply with the BS IV emission. Mated to a six-speed transmission, the engine makes top power of 25bhp along with peak torque of 19.2Nm. Read- New KTM Duke 390 – Price, Specs & Other Details

In terms of looks, the new KTM Duke 200 remains largely unchanged with superficial changes bestowed upon the bike. New design elements like the refreshed body graphics and orange rims reinforce the sporty character. In terms of equipment, the bike borrows most of the equipment from the new Duke 390. The naked streetfighter comes with new brake lever, new master cylinder and reworked pillion seat with integrated grab rails. Stopping power is derived from disc brakes and ABS adds further dint to it. Suspension mechanism comprises WP upside-down front forks and monoshock rear unit.

The naked motorcycle is powered by the same 199.5cc, single-cylinder, 4-stroke, liquid-cooled engine that also powers the previous model. This engine churns out a maximum power output of 25bhp and a peak torque of 19.2Nm. Power is transmitted to the rear wheels via a six-speed gearbox. It is to be noted that the engine is compliant with the BSIV emission norms.

Claimed to offer top speed of 150kmph, the new Duke 200 is armed with the side-mounted exhaust and Ride-by-Wire technology. As for the suspension set up, it uses WP upside-down forks at front and monoshock absorbers at rear. For retarding power, the bike gets disc brakes with anti-lock-braking system (ABS).

As mentioned in the beginning, the bike looks like a scaled-down version of the 1290 Super Duke R and is retains the single-piece frame from the outgoing model.  In front, the LED headlamp unit has been replaced with the halogen lamps. Along with the split headlamps, the bike also sports high-mounted blinkers, restyled fuel tank, smaller rear section, exposed trellis sub-frame and larger tank shrouds with contrasting colours. The new body graphics and orange rims make the bike appear sportier.

Dimensionally, the 2017 Duke 200 measures 2,050mm in length, 760mm in width and 810mm in height. The wheelbase of the motorcycle is around 1,040mm and ground clearance measuring 165mm makes it suitable for manoeuvring through the rough Indian terrains.