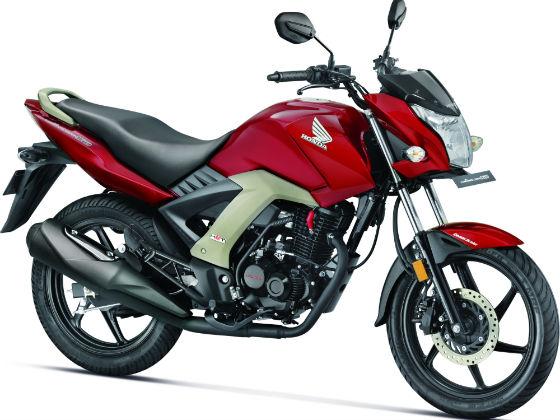 Honda 2 Wheelers India has finally launched the much-awaited new Honda CB Unicorn 160 in the country. The motorcycle is offered in two variant standard and CBS. While the standard model is priced at Rs. 69,350, the CB Unicorn 160 CBS trim is tagged at Rs. 74,414 (ex-showroom Delhi).

The new Honda Unicorn CB 160 shares most of its styling cues with the CX-01 concept shown at the 2014 Delhi Auto Show in February. Borrowing most of its design elements with CB Trigger, the new Unicorn 160 gets Honda’s conventional design philosophy with biking fairing and a new headlamp unit. It features a new muscular fuel tank with a fibre cowl that accommodates the company’s logo. Silver and white finish is offered on side panels. Surprisingly, the 160cc segment bike gets elongated single seat, missing in most of the bikes in this league. It is equipped with elements like heel-toe gear shifter, a fully covered chain guard, new saree guard, new instrument panel, new tail lights with LEDs, black theme for engine and other parts, etc.

The Honda CB Unicorn 160 is powered by a 163cc engine that is good for 14.71PS of power and 14.61Nm of peak torque. It is claimed to remain stable at a top speed of 106kmpl, which is decent. This engine is clubbed to a five-speed transmission. The suspension system comprises of conventional telescopic forks in the front and a monoshock at the rear.  It rides on 17-inch alloy wheels shod with XX tyres.

The new Honda CB Unicorn comes with Honda Eco Technology (HET), and is claimed to return an impressive fuel economy of 62kmpl.